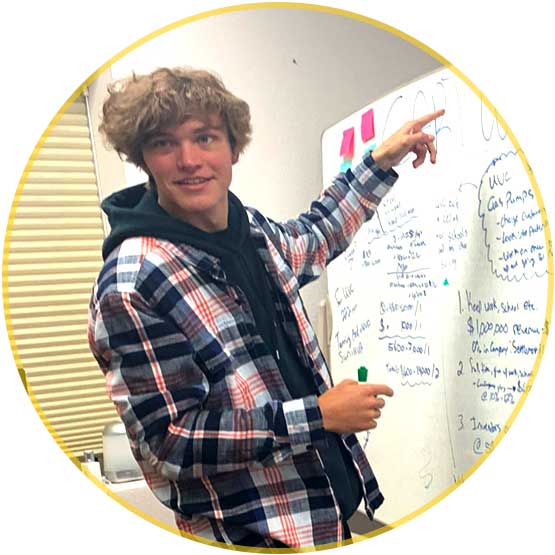 Growing up, Jayden Parsons always just assumed he would go to college to pursue some undetermined corporate job. That’s what everyone does, right? After he graduated high school Gillette, he enrolled at Gillette Community College where he was recruited to play soccer. His classes were engaging, and he was performing well, but it wasn’t until he had the opportunity to participate in a local entrepreneur challenge that he really knew what he wanted to do. And it didn’t involve college. His Wyoming public education would have to be enough formal learning – but Jayden was confident he was more than prepared.

Sage Valley Middle School’s English Communications class isn’t required for more than one year. But if students do take it for all three years, they’re rewarded by getting to sign their name on the infamous classroom wall. As a sixth grader, Jayden didn’t think he would ever see his name on that wall. The class, and teacher Eric Trauger, challenged him. It forced him to speak in front of people, learn how to ask questions extemporaneously and be creative without preparation. He kept enrolling in the class, because he knew he was growing as a student and person, so he kept his eye on the wall. Eventually, he was able to sign his name, which ended up being a minor talisman relative to everything he’d learned and become. Without that experience, Jayden could still be pursuing that indeterminant corporate job today, which isn’t anywhere near he wants to be.

“I was very, very shy in junior high,” Jayden said. “English Communications was where I learned to give speeches and make presentations, which I do now when I pitch to businesses. There was a lot of other small but really important stuff like asking questions and respecting people’s time,” he explained. Using the lessons he learned from Eric Trauger, Jayden won an entrepreneurial challenge in 2019 with the concept of CartWash – a shopping cart sanitation technology that effectively removes more germs and bacteria than standard cleaning methods. It was an idea Jayden and his partner Shey Rearick had before COVID but became much more critical just a few months after they pitched the ideal. While the pandemic created challenges to starting a company, Jayden and Shey, a fellow Gillette graduate, were prepared to adapt.

Persistence is the most important skill an entrepreneur can have, according to Jayden, and you often learn persistence by not knowing something else. As young businesspeople who forewent college, they’ve figured out how to persevere in other ways. Their Wyoming community has been invaluable to them as they continue to branch outside of Gillette with their sights set on eventual regional and national partnerships. But no matter how big they get, Wyoming will always be home base for CartWash. Jayden’s public education gave him the tools he needed to start and succeed in his career, so there’s nowhere else his business could be.